Get Ready For The Action

​​​​​​​After Covid19 cancelled pretty much everything in 2020, it was uncertain when we would be able to enjoy all those postponed tournaments. Now, 12 months on, 2021’s calendar is jam packed with a summer of live sporting events guaranteed to entertain and thrill.

​​​​​​​With something for everyone to enjoy, we’ve put together this guide to help you Get Ready for the Action! 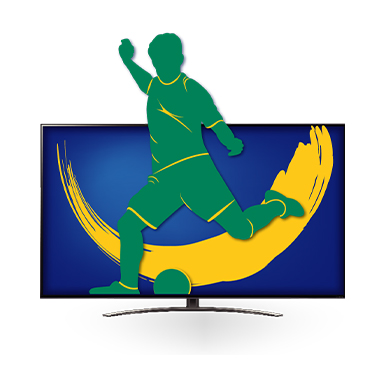 Beginning in 1960, only four teams competed at the final tournament after only 17 teams entered qualifying; with England, Wales, Scotland, and Northern Ireland not interested in participating. Held in France, the tournament took place between 6th and 10th July 1960.

UEFA Euro 2020 is being held across the continent for the first time in the competition’s 60-year history, with 11 host cities and 24 teams participating. The Semi Finals and Final are being held at Wembley Stadium in London. Other cities featured include Saint Petersburg, Baku, Munich, Rome, Amsterdam, Bucharest, Budapest, Copenhagen, Glasgow, and Seville.

For further information on all the different venues and dates of matches, please visit the Euro website.

​​​​​​One highlight to note though is the game on 18th June when England host Scotland at Wembley Stadium. A match to whet any appetite!​​​​​ 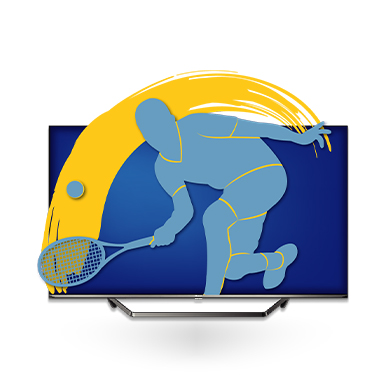 ​​​​​​​Event Dates: 28 June – 11 July
​​​​​​​
More commonly known simply as Wimbledon, the Championships is the oldest tennis tournament in the world and is widely regarded as the most prestigious. It has been held at the All England Lawn Tennis and Croquet Club since 1877. The 2020 Championships was the first time the event has been cancelled since World War II.

The Final this year will take place on the same day as the Euro 2020 Final - a double whammy on a (hopefully hot) summer’s day!​​​​ 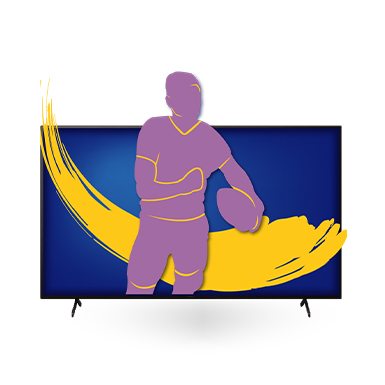 ​​​​​​​Event Dates: 26 June – 7 August
​​​​​​​
The first British & Irish Lions Tour was the brainchild of former England cricketers Alfred Shaw – who famously bowled the first ever ball in Test cricket, Arthur Shrewsbury, and James Lillywhite. In 1888, Robert Seddon took a travelling party of 22 on a 249-day tour of Australia and New Zealand – a voyage which took a long 46 days. Now, led by tour captain Alun Wyn Jones, the strong 37-man squad tour South Africa for the Castle Lager Lions Series where Head Coach Warren Gatland believes he has picked a squad capable of winning a test series.​​​​​ 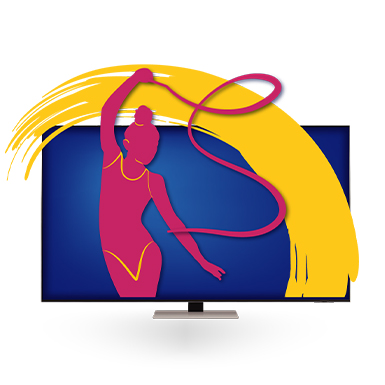 Paralympic Games: 24 August – 5 September
​​​​​​​
Held every four years, the Olympic Games is an international multi-sport event celebrated as a sports festival all over the world.
​​​​​​​
Baron Pierre de Coubertin, who began the Olympic Revival movement in 1892, advocated Olympism. This notion was to elevate the mind and soul, overcoming differences between nationalities and culturers while embracing friendship, a sense of solidarity and fair play. This would contribute to world peace and betterment – an ideal which is still used today. Baron Pierre is now revered as the ‘Father of the Olympics’ and we can certainly understand why.

Why not watch your favourite sport on a new TV? With 2021 models hitting the shops, now is a good time to invest in new technology which transforms you right into the heart of the action.​​​​
​​​​​​​
Samsung

The Samsung QE43Q60AAUXXU has a dual LED screen, which produces bold contrast and 100% colour volume of the greatest accuracy, from over a billion shades. As a result, you can watch a huge variety of entertainment, including your favourite sport, in a cinematic light, from the privacy of your sofa.

​​​​​​​Powered by Sony’s most powerful Cognitive Processor XR, the XR65X90JU takes vision and sound to the next level. Featuring XR Triluminos Pro, this model produces a wider palette of colours with an enhanced range of hue and saturation. What’s more, with XR Motion Clarity technology, fast-paced scenes are smooth and blur free so you can enjoy more of the action.​​​​​​​​​​​​ 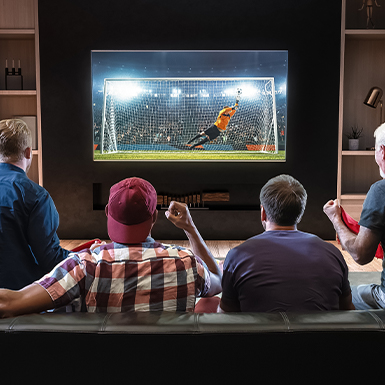 The 50U7QFTUK will broadcast programmes in a new light. Watch your favourite sport in the highest clarity, with motions so natural and details so sharp, you’ll feel more immersed than ever before.

​​​​​​​Hisense are the official sponsors of the Euro 2020 Championships and right now you can enter a prize draw to win some fantastic prizes, including Final tickets, with qualifying purchases*. Click here for further information.

We all need those all-important refreshments when watching sport. Here, we have everything covered, from chilling your favourite beverages to cooking the tastiest snacks.
​​​​​​​

Hosting gatherings or having a garden party? Store all the groceries in a fridge freezer built to last. With Frost Free technology, multiple storage options and a large capacity, they’re ideal for either upgrading your existing model or using as an additional appliance. 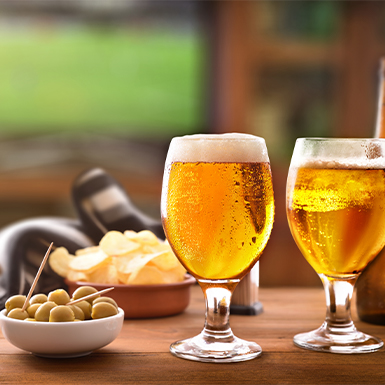 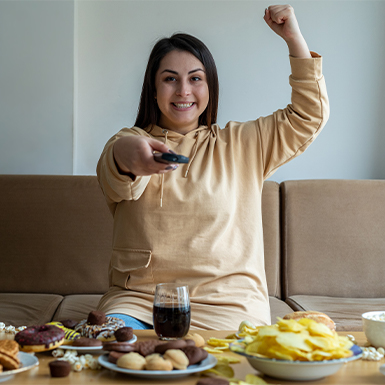 If you’re more into smoothies and shakes, the BN495UK Ninja blender is ideal for making your top choice drinks. Or, if you’re feeling particularly adventurous, try making delicious margaritas or other blended cocktails to really get the party started. As this is blend to cup, you can enjoy on-the-go too – perfect for drinking at match gatherings at friends’ houses.

​​​​​​​The Ninja Air Fryer offers a quick and easy way to cook everything from fries and crisps to vegetables and beef jerky – all in one handy appliance. Using little to no oil, the AF300UK offers perfectly cooked foods up to 75% less fat than traditional frying methods. Serve up chicken wings, fries, and crisps just the way you like them.​​​​​

​​​​​​​Whether you are part of a local team or stand at the side-lines on a Sunday morning cheering on your children, we have laundry appliances to tackle the most stubborn stains. From grass to mud, these products have you covered.​​​​​
​​​​​​​
Hotpoint ActiveCare

​​​​​​​​​​​​​​Samsung’s EcoBubble™​​​​​​​ ​​​​​​​ feature mixes air and the perfect amount of water with your detergent to create powerful bubbles before the cycle starts. This clever function lifts dirt from your clothes quickly and effectively, so you can wash at lower temperatures without compromising on performance.
​​​​​​​​​​​​​​​​​​​​​​​​​​ 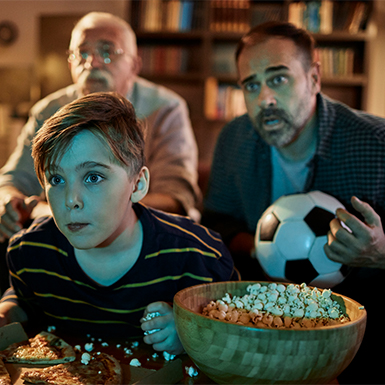 ​​​​​​​Some machines have specially designed drums, created to move your laundry items around evenly during a wash. This helps to ensure that every piece is thoroughly cleaned and washed. LG’s unique ‘6 Motion Direct Drive’ moves the wash drum in multiple directions, caring for fabrics while getting clothes ultra clean. For powerful washing use Stepping, Filtration, and Scrubbing, while Tumble, Rolling, and Swing help take care of delicate items.
​​​​​​​​​​​​​​​​​​​​​
​​​​​​​​​​​​​​For more information regarding other washing machine technology, please see our blog here.​​​​ 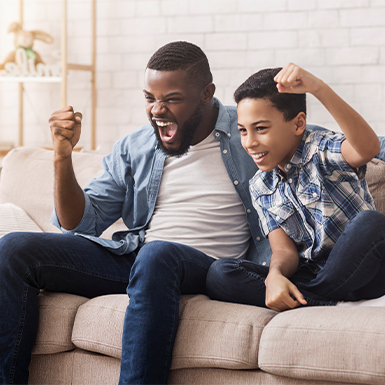